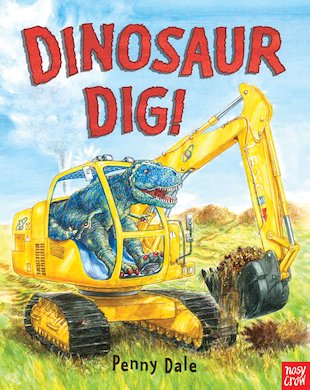 You might have heard of dinosaurs being dug up! But these ones love to dig! This thrilling book has everything that gets small boys excited – diggers, dinosaurs and dirt, plus a bit of counting thrown in for good measure. Budding mechanics will squeal with excitement as enormous beasts get behind the wheel of their equally huge machines! Penny Dale, the award-winning author and illustrator of Ten in the Bed, shows the creatures and their vehicles in wonderful detail as they dig holes, lift blocks of stone, roll grit and spray blue paint everywhere. Bursting with energy and noise, and ending in a splashy surprise, it’s a riot of excitement told in romping, stomping rhyme.