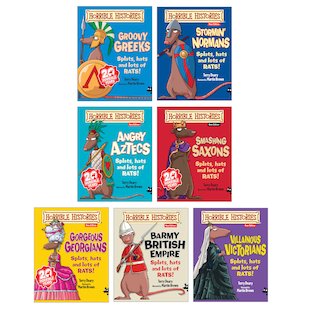 The classic bestsellers. Learn while you laugh out loud! No more nice-guy nonsense about history. It’s time to learn it the horrible way. Yes – history can be horribly boring when you learn it in the classroom. But with all the nasty bits left in, it’s historically funny! Laughs, disasters and disgusting jokes from the reigning kings of yuck: author Terry Deary and cartoonist Martin Brown. You love this series so much you’ve bought over 25 million copies. How’s that for a horrible fact?