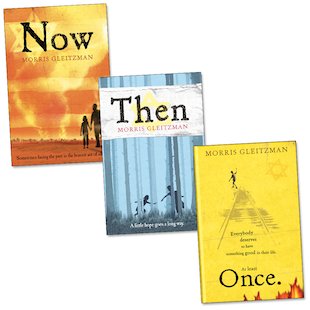 “Once I escaped from an orphanage to find Mum and Dad. Once I rescued a girl called Zelda from a burning house. Once I made a Nazi with toothache laugh.”

Morris Gleitzman’s powerful saga of a young fugitive running for his life in Nazi-occupied Poland, which has captured the hearts and minds of readers worldwide. Once there was a boy called Felix, who believed in good things. Even when his parents were taken by the Nazis. Even when he hid for three years in a Polish orphanage high in the mountains. Then Felix set out to find his parents, and his whole world changed forever… As Felix and his friend Zelda dodge convoys to the death camps, hide from genocidal Nazis and search for a place of safety, how far will hope and courage take them? In this profound and moving trilogy, one of Australia’s most celebrated children’s authors takes Felix’s story from the Second World War right up to the present day.