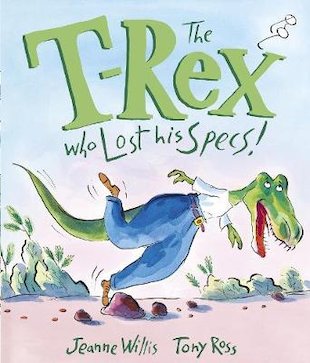 The T-Rex Who Lost His Specs!

Life ought to be easy for this T-Rex. After all, he’s the king of the dinosaurs. ROAAAR! He’s the biggest and baddest. Everyone is scared of him. There’s just one problem: he’s mislaid his specs. Oh dear! First he eats a slipper instead of his breakfast toast. Then he mistakes a prehistoric owl for his bath towel. Oopsie! As one mishap follows another, will he make it to the end of his day in one piece? Dino world is a dangerous place, and only the strongest survive…