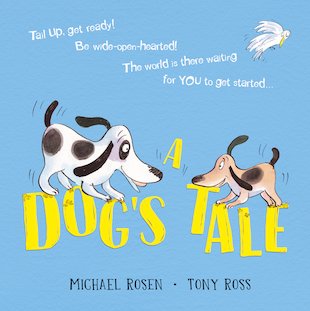 A Dog's Tale: Life Lessons for a Pup

To fetch! To play! To wag tails all day! Explore a pup’s life in Michael Rosen’s cuddly new rhyme. Just like any little person, the puppy in this story wants to live life to the max. He wants to dig holes, catch frisbees and race up the highest hills. But the big wide world can be a puzzling place. Sometimes it rains on your fur. Other times, you fall over and have to get up. Who can help the puppy make sense of things? Luckily a big dog is there to lend a paw, and help this little fellow stay on top…