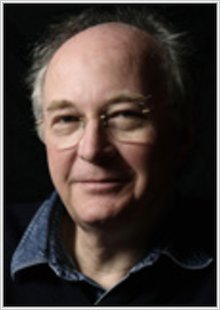 Philip Pullman is the author of The Golden Compass, the Hollywood smash hit film starring Nicole Kidman and Daniel Craig. Before conquering Hollywood, the book – originally published as Northern Lights – sold several million copies and won just about every major children’s book prize going. Philip travelled all round the world as a boy, devouring comic books and idolising his heroes Batman and Superman. When he grew up he became a teacher in Oxford and started to write books in a shed at the bottom of his garden. Even though The Golden Compass has stirred up controversy, he says that if it suddenly became against the law to write stories, he would break the law without a second’s hesitation. He says, “Stories are the most important thing in the world. Without stories, we wouldn’t be human beings at all.” When Philip isn’t writing, he likes to play the piano (badly), draw and make things out of wood.

Philip won the Nestle Smarties award for both Clockwork and The Firework Maker’s Daughter. Northern Lights was published in hardback in July 1995. That year, it won the Carnegie Medal and Guardian Children’s Fiction Prize and was Children’s Book of the Year at the British Book Awards.

Philip has also been recognised with two major awards for his contribution to literature: the Eleanor Farjeon award in 2002, and the Astrid Lindgren Memorial Prize in 2005.