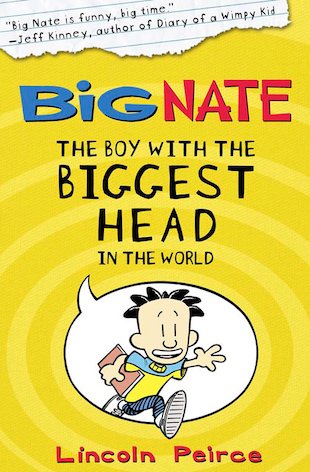 Big Nate: The Boy with the Biggest Head in the World

Meet the classic comic-strip character who inspired the Wimpy Kid, as he stars in his own super-funny book series! Big-headed Nate Wright truly believes he is destined for greatness. After all, he’s a table tennis champ, a genius comic book artist and the self-proclaimed king of his class. So why is he having such a bad day? He barely survives his dad’s toxic porridge. He accidentally body-slams his headmaster AND insults his worst teacher, Mrs Godfrey (aka “Godzilla”). He attempts to set a speed-eating world record (gross) – and succeeds in setting a new school record in getting the most detentions in one day! Packed with cartoons and comic-strips, this is truly hysterical stuff. If you love to laugh, you’re going to love Big Nate!

“Big Nate is funny, big time… Lincoln Peirce is one of my cartooning heroes, and Big Nate ranks as a comics classic.” Jeff Kinney, author of “Diary of a Wimpy Kid”