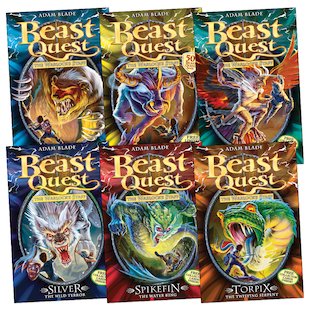 Tom is back in the Quest of his life – and the fate of all the world is at stake! Evil Malvel has stolen the priceless Warlock’s Staff which will allow him to rule every kingdom. If he reaches the Eternal Flame in the mysterious realm of Seraph, he will become all-powerful. Stout-hearted Tom has sworn never to let that happen. If Malvel wants to conquer the entire world, he must first defeat Avantia’s plucky young hero. But can Tom defend himself in mortal combat with six terrible new Beasts? If he fails, all the world will fall under Malvel’s wicked thrall… Shudder as the stakes shoot higher than ever in the ninth nerve-racking series of Beast Quest!