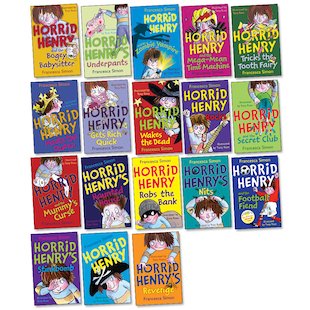 Lots of little boys are naughty. Sometimes they’re even quite nasty. But none of them were ever as naughty and nasty as Horrid Henry! He’s the boy who has his teachers running from the classroom; the one who leaves grown-ups in tears, and his unlucky playmates hiding behind chairs. And now his poor old mum and dad have simply had enough, and they’re ready to give him away to anyone who’ll have him! So take this big bad sack of Horrid Henry off his parents’ hands. They’ll be smiling with joy – and you’ll be cackling with glee!