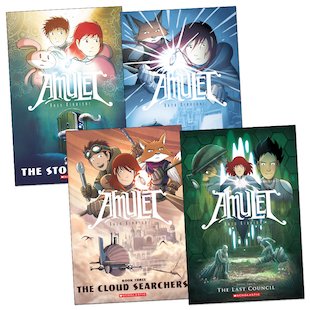 Breathtaking fantasy in a graphic novel format – so cool that Will Smith almost made it into a film. Enter a world of man-eating demons, brave kids and giant robots in the incredible Amulet series. Your life will be transformed… When a sinister creature lures their mother through a door in the basement, Emily and Navin follow her into an underground world. Follow them into this dangerous land and and discover the secret of their destiny. Told in colour picture strips by graphic novel star Kazu Kibuishi, this is comic fiction so amazing that Will Smith and Warner Bros. bought the movie rights.

“Five no, three pages into Amulet and you’ll be hooked.” Jeff Smith, creator of ‘Bone’