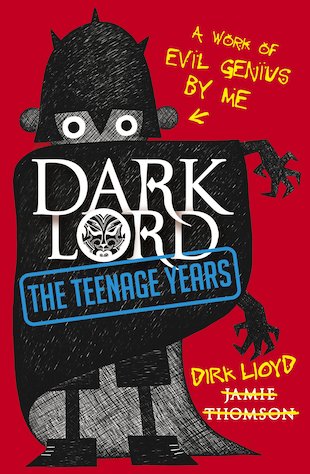 Thirteen-year-old Dirk Lloyd has a secret. He is the earthly incarnation of the Dark Lord, supreme ruler of the Darklands, bent on death and bloody ruin. Following a colossal battle, the Dark Lord was defeated and hurled into the Pit of Uttermost Despair. And at the bottom of the Pit lies… a supermarket car park in the town of Whiteshields. Nobody believes the Dark Lord when he tries to explain his true identity. The fact that he’s trapped in the body of a puny schoolboy doesn’t help. So Dirk begins his battle to win back his dignity, his power and his lands. But faced with a do-gooding foster family, a horrid headmaster and two interfering psychotherapists, what’s an evil god to do?

“This is hilarious, and is set to have us inferior puny humans laughing out loud… It really is a work of ‘evil genius.’” LiteraryLoves.com