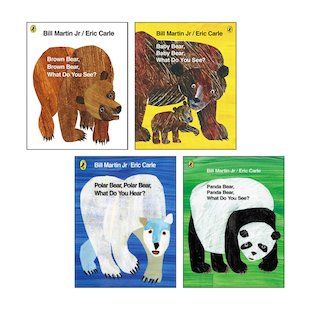 Oh joy! More from the genius who first delighted you with The Very Hungry Caterpillar. Rhyming classics that tickle your senses and introduce a world of animals. What do you see and hear? Superbly satisfying! Four cuddly bears each set off for a stroll. Brown Bear meets lots of critters who teach him about colours. Baby Bear is looking for his mum, but who else will he meet on his journey? Panda bumps into some very rare animals – almost as rare as him! As for Polar Bear, he’s listening hard. Who’s making that roar? And what is that trumpeting sound?