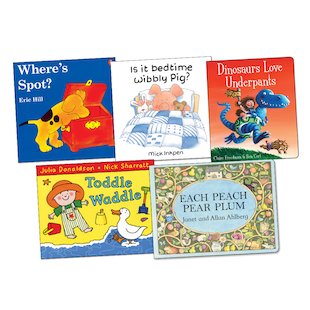 New favourites and old classics come together in this pack of charming and comical treasures from award-winning authors. From the timeless peekaboo fun of Each Peach Pear Plum to the innocent joy of Mick Inkpen’s Wibbly Pig, these books embody the delights that childhood stories can bring. A little toddler causes chaos on a stroll along the pier in Julia Donaldson’s Toddle Waddle; Spot the dog hides under a multitude of flaps; nursery rhyme characters pop up in unexpected situations – and some cheeky dinosaurs go wild prancing round in underpants! Whether children are rhyming aloud, peeping under flaps or pretending to bounce with Wibbly Pig, they’ll be completely enthralled.