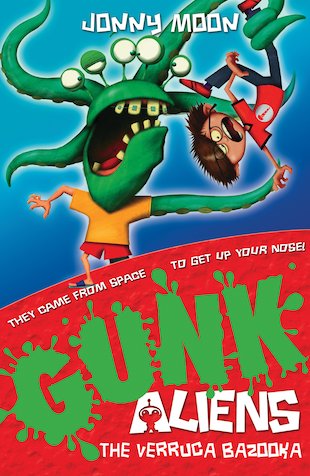 Meet the Gunk Aliens! They’re coming to get up your nose! These gloopy outer-space baddies live off bogies. And Earthling snot is next on their menu… A long time ago, on a planet really, really far away, a bunch of slimy aliens discovered the secret of renewable energy: snot! That was when the Galactic Union of Nasty Killer Aliens (G.U.N.K.) was born. Its mission: to find human life and drain its snot! Rockets were sent to the four corners of the known universe, each carrying representatives from the major alien races. Three of them were never heard from again. But one of them landed on a planet quite simply full of humans. This one. Now all that stands between earth and alien invasion is a hero named Jack. Problem is, he’s not even out of primary school yet!