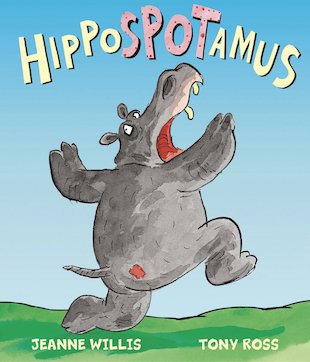 Hippopotamus has a spotamus… right on her bottomus! How embarrassing! “It’s Measles!” says Weasel. “It’s Hippopox!” says Fox. “It’s Jungle Fever!” says Beaver. Whatever could it be? This red-faced hippo’s reddened rear is causing havoc in the animal kingdom. But in the end, the spotamus turns out to be something hilariously unexpected! Treat yourself to a spotamus of laughter with this cheeky gem from two all-time greats: top author Jeanne Willis and illustrator Tony Ross.

“A dream team of writer and illustrator!” Times