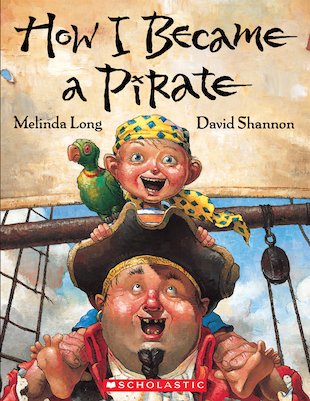 How I Became a Pirate

When Braid Beard and his pirate crew invite Jeremy Jacob to join their voyage, he jumps right aboard! Buried treasure, sea shanties, pirate talk – who wouldn’t go along? Soon Jeremy is acting just like a pirate should, hollering like thunder, throwing his food across the table and his manners to the wind. It’s the heave-ho, blow-the-man-down, very best time of his life! Until he finds out what pirates DON’T do. No reading bedtime stories, no tucking kids in… Maybe being a pirate isn’t so great after all! Caldecott Honor-winning illustrator David Shannon teams up with witty storyteller Melinda Long in this hilarious look at the finer points of pirate life.