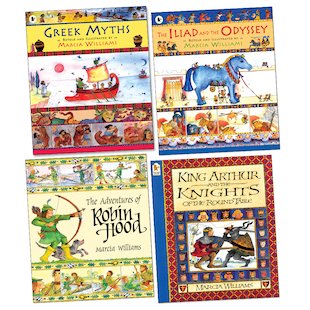 The Greek myths. The Iliad and the Odyssey. King Arthur’s legends. Robin Hood. Do you dream of being the hero who sees the action unfold right before his eyes? Then these big, brave, bold books are for you. In thrilling picture strips full of incredible detail, they tell the world’s greatest stories – complete with the spears, the shields, the monsters, the heroes, the villains, the gods and goddesses, the voyages, battles, tragedies and victories. Technicolour legends which unfold as you turn each page, tossing in heaps of jokes as well. Hollywood has nothing on this!