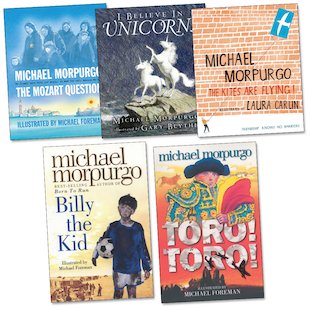 Five stunning Morpurgo favourites which explore war and conflict in a rich variety of voices – from a child trapped behind the West Bank Wall to the heartbreaking secret of a world-famous Jewish violinist. Told with poignancy and realism, these illustrated short novels explore the legacy of war, yet give a message of hope for a brighter future. Why does Holocaust survivor and concert violinist Paulo Levi refuse to play Mozart? In the Spanish Civil War, can the bond between a boy and a bull help Antonito to recover from the massacre he has seen? As Said, a young Palestinian boy, builds his exquisite mini kites, will TV journalist Max be able to find out why he no longer speaks? And can a former soccer star, his own career torn apart by war, help a budding player to fulfil his dream of becoming a Chelsea champ?

Exploring modern conflicts including the Second World War, the Balkan conflict and bloodshed in the Middle East, these gripping, unforgettable novels tell stories that the whole world should hear.