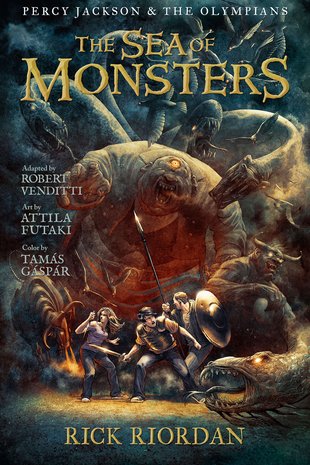 Percy Jackson and the Olympians: The Sea of Monsters (Graphic Novel)

The magical borders protecting Half-Blood Hill’s young demi-gods are failing. Somebody has poisoned the magical pine tree which protects the borders from danger. As demons and monsters attack, the only way to restore the tree’s power is to find the mythical Golden Fleece. But the Fleece lies lost across the Sea of Monsters, a place of treachery and terror… Rick Riordan’s blockbuster comes to life in this brilliant graphic adaptation, featuring stunning artwork by Attila Futaki and sumptuous colors by newcomer Tamas Gaspar.