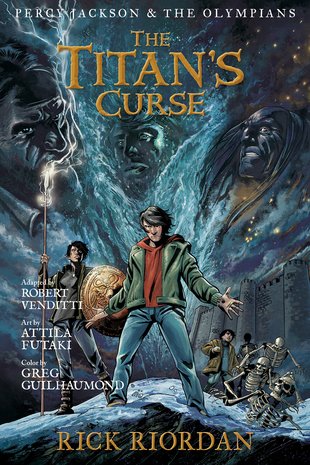 Percy Jackson and the Olympians: The Titan's Curse Graphic Novel

A titanic adventure… in pictures. Percy rules. Can’t think of anything better than an epic Percy Jackson quest? Well, try this. A Percy Jackson quest in colour pictures. All the drama and tension. Plus seriously detailed comic-strip art that shows the immense monsters and landscapes like never before. The Titan Lord Kronos has set up his most devious trap yet. Percy and Grover have just fallen into it. Now they face the chilling Titan’s Curse. They must rescue the goddess Artemis by the Winter Solstice, or all will be lost. Including Annabeth.