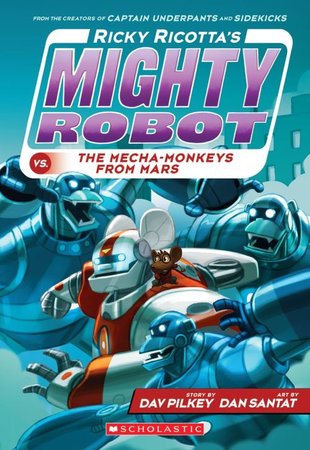 Flip-o-rama, cartoons and a mighty mini hero. The Captain Underpants creator strikes again. Tra-la-la: even the Captain is going nuts for this cool series. It’s even funnier than pants! Ricky Ricotta and his robot have crashed the Ricotta family van while using it as a skateboard. Oops. How will they pay for repairs? Meanwhile, far away on Mars, an evil alien monkey is plotting to enslave mousekind. Major Monkey has had his eye on Earth for ages. But he knows that all the aliens who invade are foiled by Ricky’s Mighty Robot! So the first thing to do is get rid of that robot…