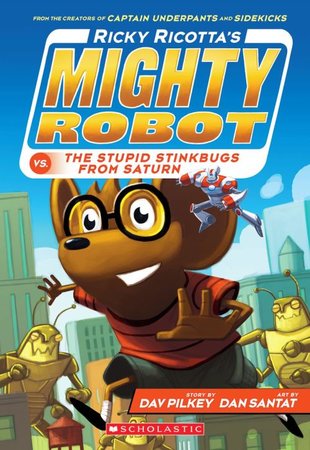 Epic laughs and great cartoons from the Captain Underpants man. Even funnier than underwear. What’s worse than scary alien invaders? Attacking aliens who really pong. Think a school locker room stinks? Or boiled cabbage? Or a rotten egg in a smelly old trainer? These giant stinkbugs reek like all those things rolled into one. BUT they aren’t very smart. They wanted to kidnap the king of the world. Instead, they’ve taken Ricky’s little cousin Lucy. Okay, she’s a pest but she doesn’t deserve that. Hold your nose for an epic battle…