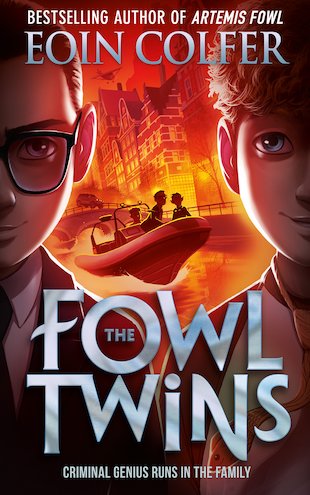 A mahoosive adventure starring Artemis’s twin brothers! Does criminal genius run in the family? Myles and Beckett Fowl are twins who couldn’t be more different. Beckett is blonde, messy and sulks if he has to wear clothes. Myles is impeccably neat, has an IQ of 170, and 3D prints a fresh suit every day, like his big brother Artemis. A week after they turn eleven, the twins are left in the care of their home security system, NANNI, for a night. One single night. That’s all it takes for them to befriend a runaway troll, get shot at, kidnapped, buried, arrested, threatened, killed (temporarily) – and learn that the strongest bond in the world is the one that exists between a twin and his brother.

“It’s a wildly entertaining ride with all the high-adrenalin action, whip-smart dialogue, and ingenious gadgets you could hope for.” The Bookseller