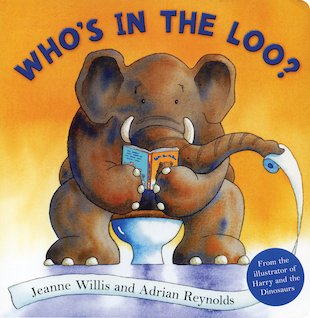 Who's in the Loo?

Who’s in the loo? There’s such a big queue! Is it an elephant having a poo? Or maybe a tiger who needed a tiddle, or a wandering wombat who wanted a widdle! Perhaps it’s a hamster who can’t reach the seat – or maybe a monkey who’s washing his feet. Find out in a gloriously irreverent rhyme from a best-loved author and illustrator, which lays on heaps of comical suspense before ending in a very cute surprise!

Winner of the Red House Award and the Sheffield Children’s Book Award.

“A lovely build-up of a lengthening queue for the loo at the zoo …. A certain hit.” Boysintobooks.co.uk