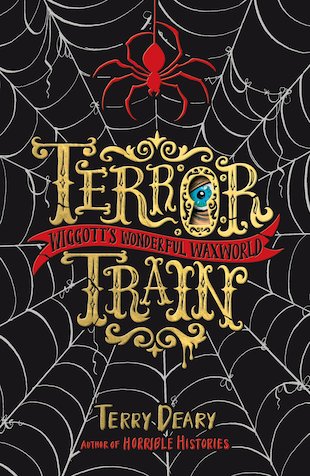 A mysterious tower. A girl trapped in a glass case. A stolen phone. A door to a secret world. Gruesome, ghastly, glorious: everything you’d expect from Terry Deary. A rollicking time-travel frolic by the Horrible Histories star. Things aren’t going too well for Boy in Wildpool. The police are looking for him, and so is the scary Arfur Loaf. Still, heading to Wiggott’s Wonderful Waxworld to lie low might be the worst decision Boy’s ever made. No – getting on the Terror Train: that’s the worst decision he’s ever made. Now two notorious Victorian killers, Burke and Hare, are after him as well! It’s up to Boy to get back to his own time, escape the Terror Train and rescue the girl. Surely that’s plenty for any boy to do in one day?