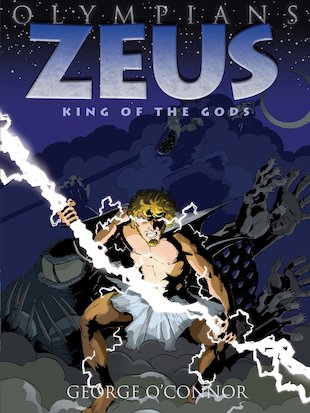 Zeus: King of the Gods

Enter an age of mighty gods and ancient conflicts in a dynamic graphic novel stuffed with colour artwork! Can Zeus defeat his all-powerful father, Kronos, and win the throne of the gods? Go back to the place where all the legends start: the beginning of everything – the world, the gods, and even humanity. Mighty Kronos, the most terrifying of all the Titans, reigns as the unchallenged leader of the cosmos… until his son, the god Zeus, stands up and makes war against his own father. It’s a battle intense enough to shatter the universe! But who will emerge triumphant? Get ready for terrifying battles, daring quests and dreadful monsters as the Greek gods come to explosive life in the world of the Olympians!